“Good morning sir, does this train go to Reading?” “Not unless they have lied on the display”

Well, not a bad start to my trip from London to Reading.

A couple of nights before the 2022 easter vacation, my mate and I had been surfing frantically on the internet to find out a suitable accommodation for us to stay at Bath. But nothing seemed to click, there were either no spots left in places or the spots that were left were too expensive for our liking. In hindsight, this was a good thing as it caused us to think of a cheaper alternative. My mate lived in Reading and Bath’s only about an hour’s journey away at a reasonable (up for debate) train price of 32 GBP (return trip included). So, we decided that I would go to Reading and stay at his for 3 days while we head over to Bath for the first two days.

We had heard wonderful things about the heritage, the picturesque sceneries and the aesthetic structure of buildings from a bygone era. But, in terms of what we would do at Bath, we didn’t really have a plan. So, we decided to not have a structured plan, but use our visit as a way to gain a general feel of the city. And to be fair, this strategy really helped us enjoy our little getaway!

After a filling breakfast from the first Wendy’s in the UK, located in Reading, we headed over to Bath via a 54 minute train journey. On getting out at Bath Spa, we walked straight over to a pillar that seemed to have a map of the whole city (at least the touristy parts). As we struggled to make sense of what seemed to be unfamiliar land, we were greeted by a cheerful, elderly man dressed in a blue vest. “Would you like some help?”. On understanding that we were new to his beautiful city, he handed us over a brochure with a map which seemed to be a miniature version of the one on the pillar. He went on to explain the map and areas we could go to. 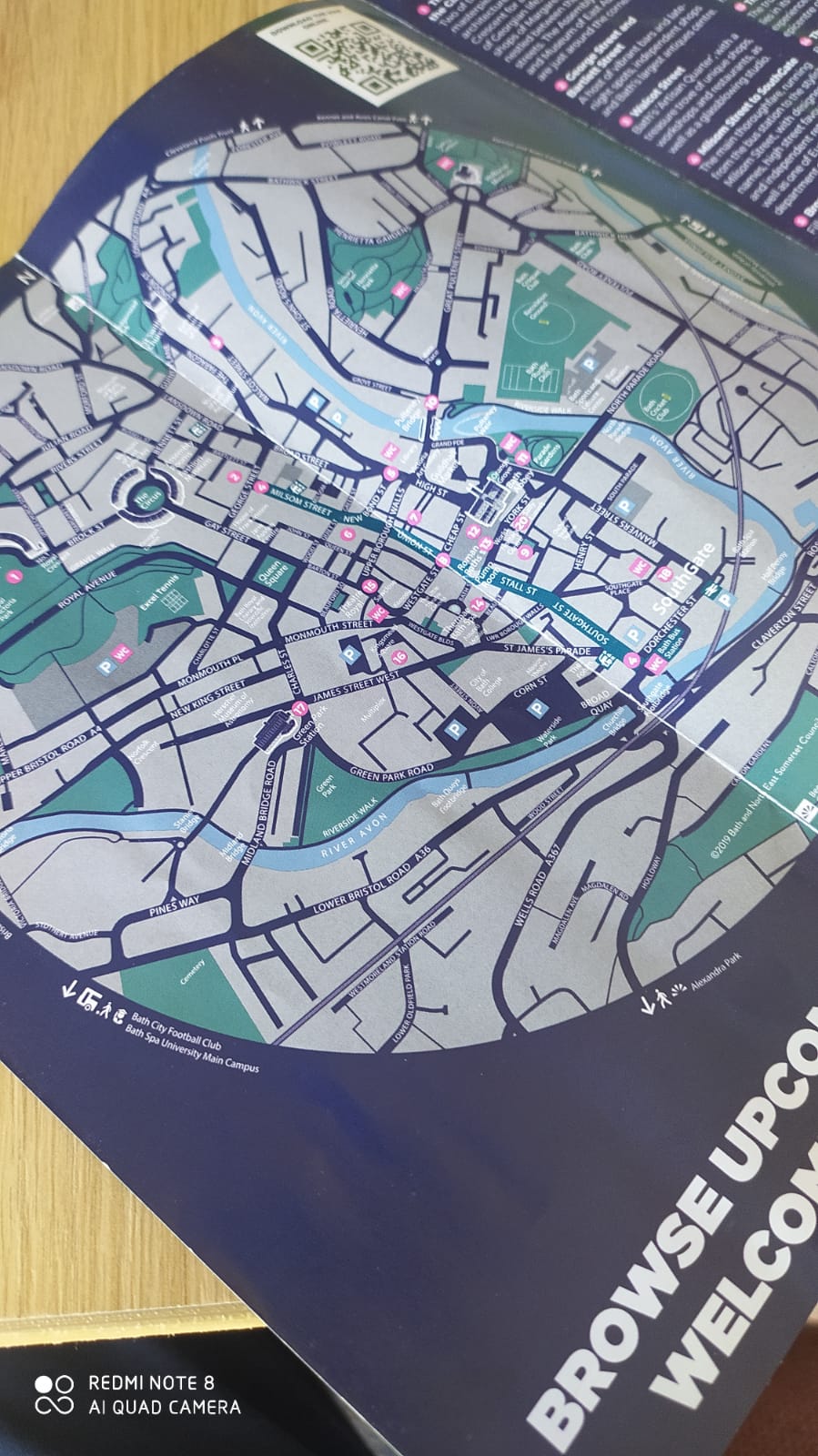 The white edges of the brochure indicate how heavily used it had been :D

We first decided to walk around the city and get a feel for it before investing time in visiting attractions. So thus began our wandering through the World Heritage Site of Bath. This was a place that was nothing like anything I had seen before. The city was a result of a marriage between architecture from the old times and modern day living and tourism. From the side of the latter, there were loads of eateries catering to a variety of tastes, gift shops with cute merchandise, artists indulging in praise-worthy street performances, advertisements on available guided walks and the sightings of the popular hop-on, hop-off Toot Bus. As we walked past the Bath Abbey, we also noticed the Ukraine flag flying high atop the church and a peaceful gathering of people holding placards demanding that the invasion of Ukraine by Russia be abandoned. 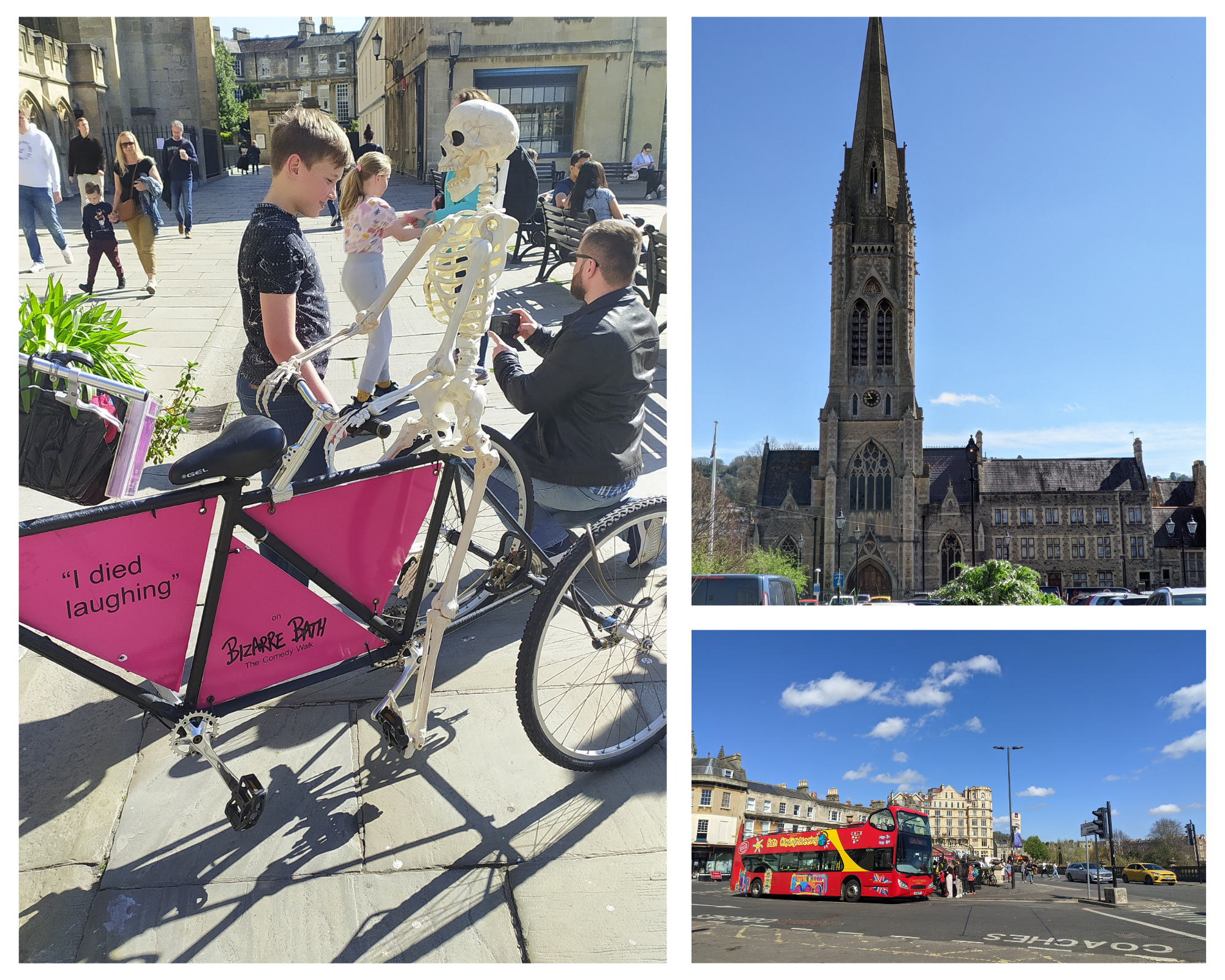 As it was a hot day, we headed over to an Iceland store to grab some water. By now, we had a general feel for the city and decided to hop on to one of the Toot buses and tour the city. There were two routes the buses took, the first was the Bath City Tour that took you through the city and covered the main attractions that Bath is known for such as the Roman Baths, Pulteney Bridge, Bath Abbey, the Royal Crescent and several museums. The Bath Skyline Tour took you around the English countryside covering attractions such as the Bath University, Prior Park, Claverton Down and other areas of scenic beauty.

Armed with the brochure and map, we decided to start with the skyline tour and enjoy a walk through the English countryside. We got of at the Prior park bus stop and as we walked through the wide open gates of the park, we noticed a park official, a kind-looking woman in her late forties explaining the fun things to do in the park to a family of 5. We quietly slid into the gathering and briefly understood the history of the park, the walking trail people usually follow and the fun activities for families and children to engage in. We headed over to the counter to buy our tickets and in the process got the pleasure of interacting with another official who gave us a map of the Prior park gardens and explained how we could walk back into the city through the park if we wished to. This was an exciting proposition and my eyes lit up! I also grabbed a guide book to the park as a utility souvenir. 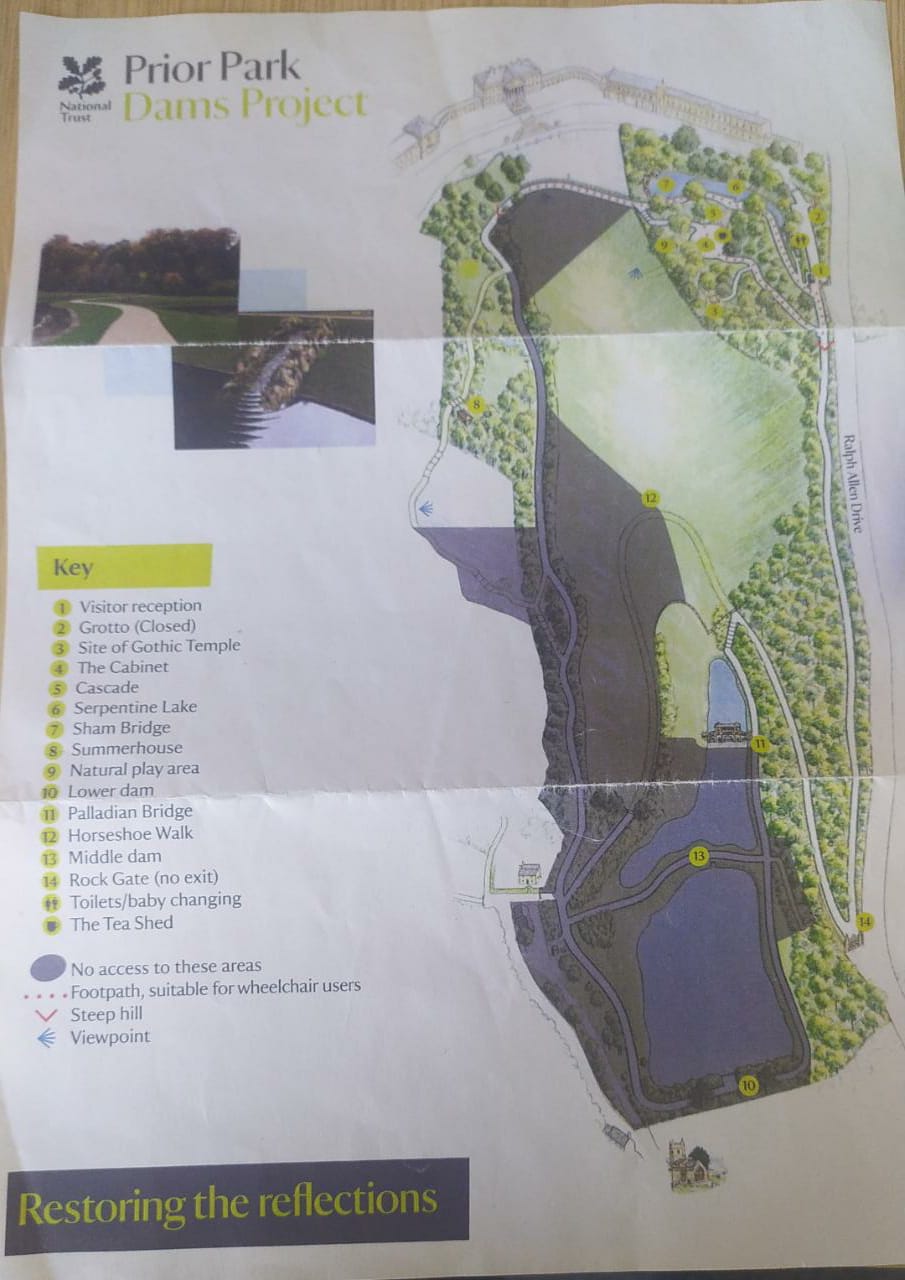 Our only source of truth to help with navigation!

Refilling ourselves with some much needed ice-cream from the Tea shed, we began our journey into the park. As we walked through the calm, yet wild gardens it became apparent to us why it had been named “Landscape gardens”. A stunning stimulation to the senses, the gardens were a combination of natural beauty as well as man-made structures that have stood the test of time and continue to be the subject of the tourist’s curiosity and marvel. The first landmark we recognized was the Serpentine lake and the Sham bridge. The lake had water plants growing on it and also what appeared to be small aquatic life at the lake bed. Tall blades of grass stood on the other bank of the lake blending in with the wilderness beyond. Soon, we came across other structures such as the Summerhouse, the splendid Palladian Bridge and the site of the Gothic temple. We also walked right across the meadows in the middle, a walk that was fairly easy downhill but literally “breath-taking” uphill. 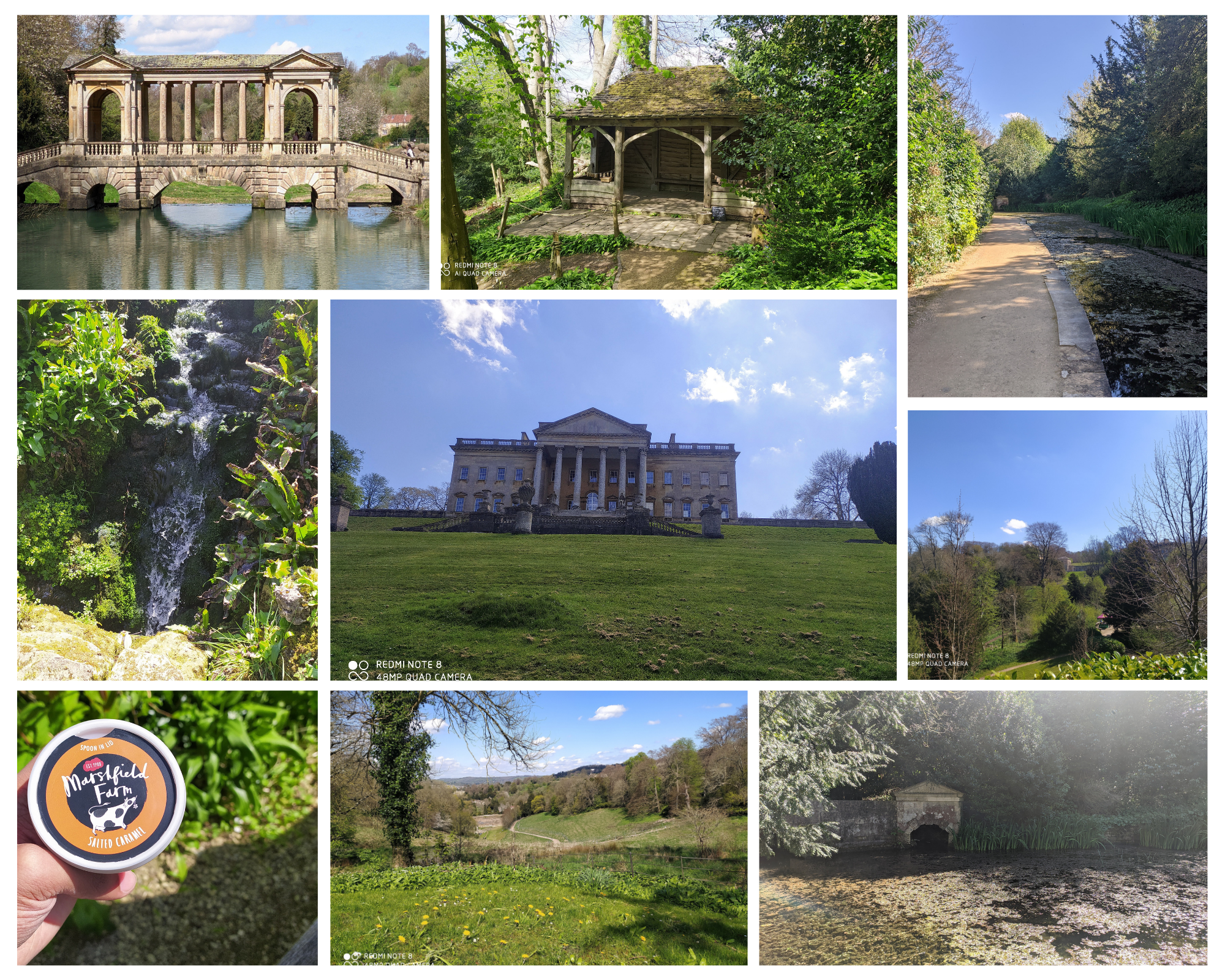 The visual beauty in the park

We also came across a large mansion of Palladian architecture situated atop a hill. This was Prior Park, designed by John Wood, the Elder who was responsible for a lot of the exquisite architecture in Bath. And this was commissioned by Ralph Allen, a postmaster turned entrepreneur living in Bath during the mid 18th century. Ralph Allen was a thorough visionary who was responsible for much of the commercialisation of Bath stone. The mansion was a way to show the world what the Bath stone was capable of.

Ralph Allen was also the first to recognize the impact the railway would have in expediting trade and thus commissioned the building of a track from Combe Down to River Avon where the stone from the mines could be used for the architecture at Bath or sent to other cities such as Bristol or the magnificent London. Damn, he was a genius!

After a long trek, we finally got onto the Priory path and reached the vantage point from where we could overlook the whole city of Bath. Soaking in the moment and after adding more pictures into our phones, we continued along the path. We possibly took a detour somewhere as we could not understand our position on the map anymore! However, we somehow reached the entrance of the Bath skyline walk - a 6 mile adventure through more scenic beauty over the hills of Bath. Clearly exhausted by then (and hungry), we examined the large map at the entrance of the walk to see if there was a faster way to get to the city. There was a 2 mile variant of the skyline walk that most people took which took us into the city. We decided to take this. Again, we found ourselves lost at some point, however after another 3-4 miles of walking, we finally got back to the city centre (put pic of civilisation!). Exhausted, we went into a GBK and had what we consider to be one of the most satisfying meals in our life. And it probably was not just because GBK makes great food! 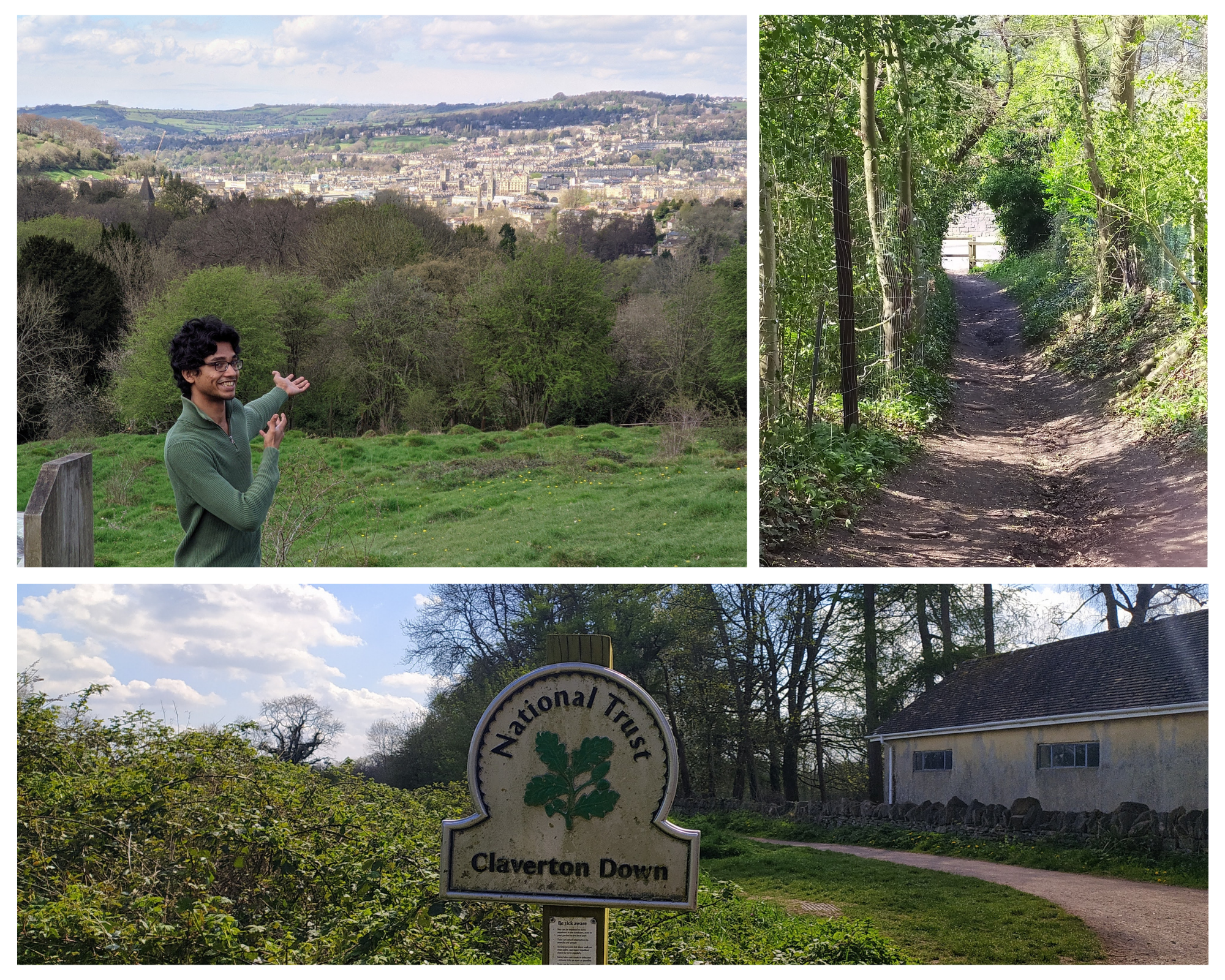 After a filling late lunch, we headed over to the Roman Baths, the main attraction in the city from which it gets its name. The city of Bath was originally the Roman settlement of Aquae Sulis. The baths were actively used as public baths by the Romans until the 5th Century, AD. After clicking loads of pictures and learning about the place via the displays and the guided audio-tour, we headed over to the gift shop. There were a lot of things I wanted to buy, but my wallet didn’t agree 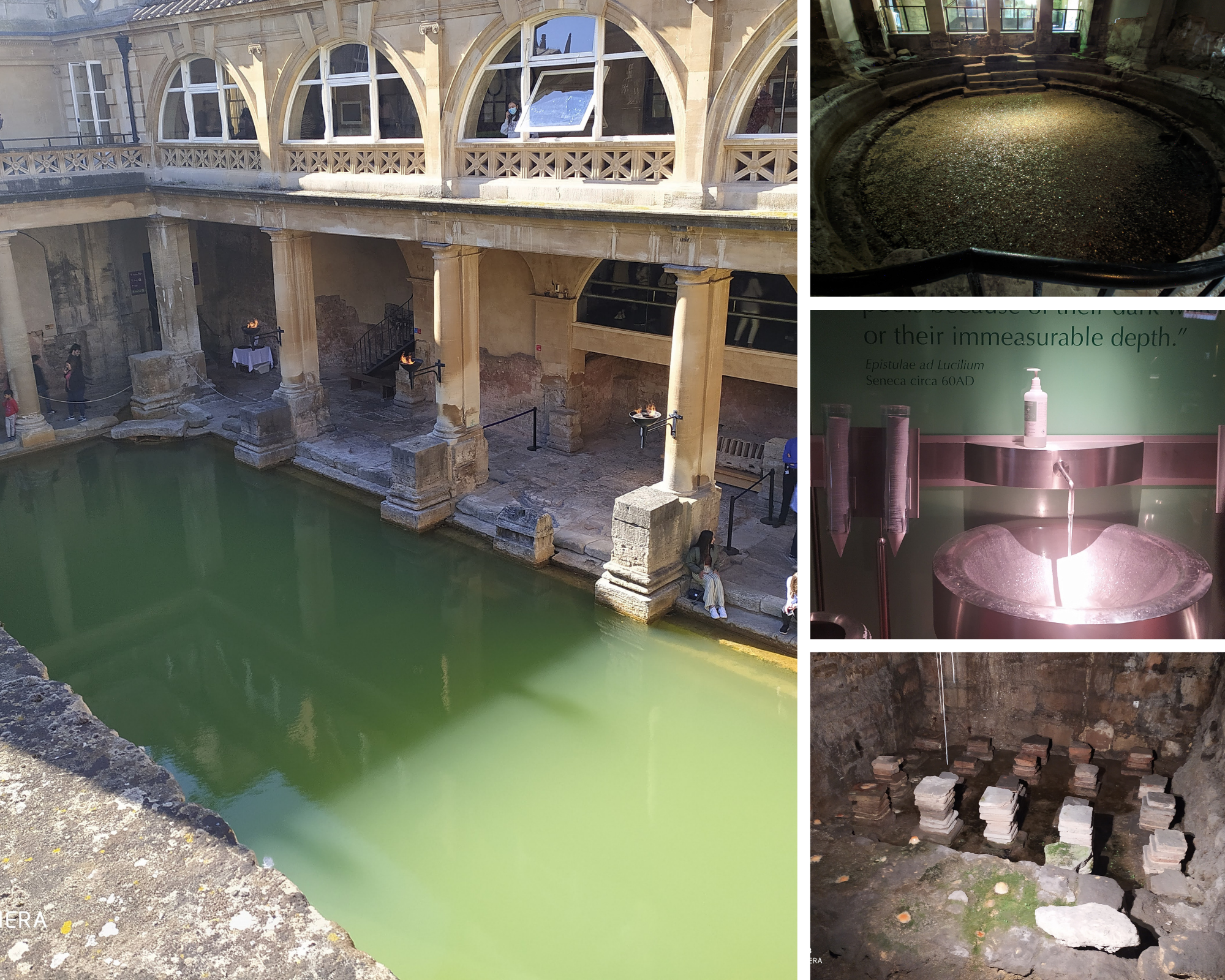 The water from the sacred spring (right centre) had a very strong iron taste to it. I loved it and my mate hated it!

We ended the day with a visit to Pulteney Bridge followed by watching “The Northman” at a nearby ODEON (the movie had some pretty shoddy writing). Finally we had a quick, light dinner at a place that served nice Indian cuisine before heading back to Bath Spa station for our train back to Reading. 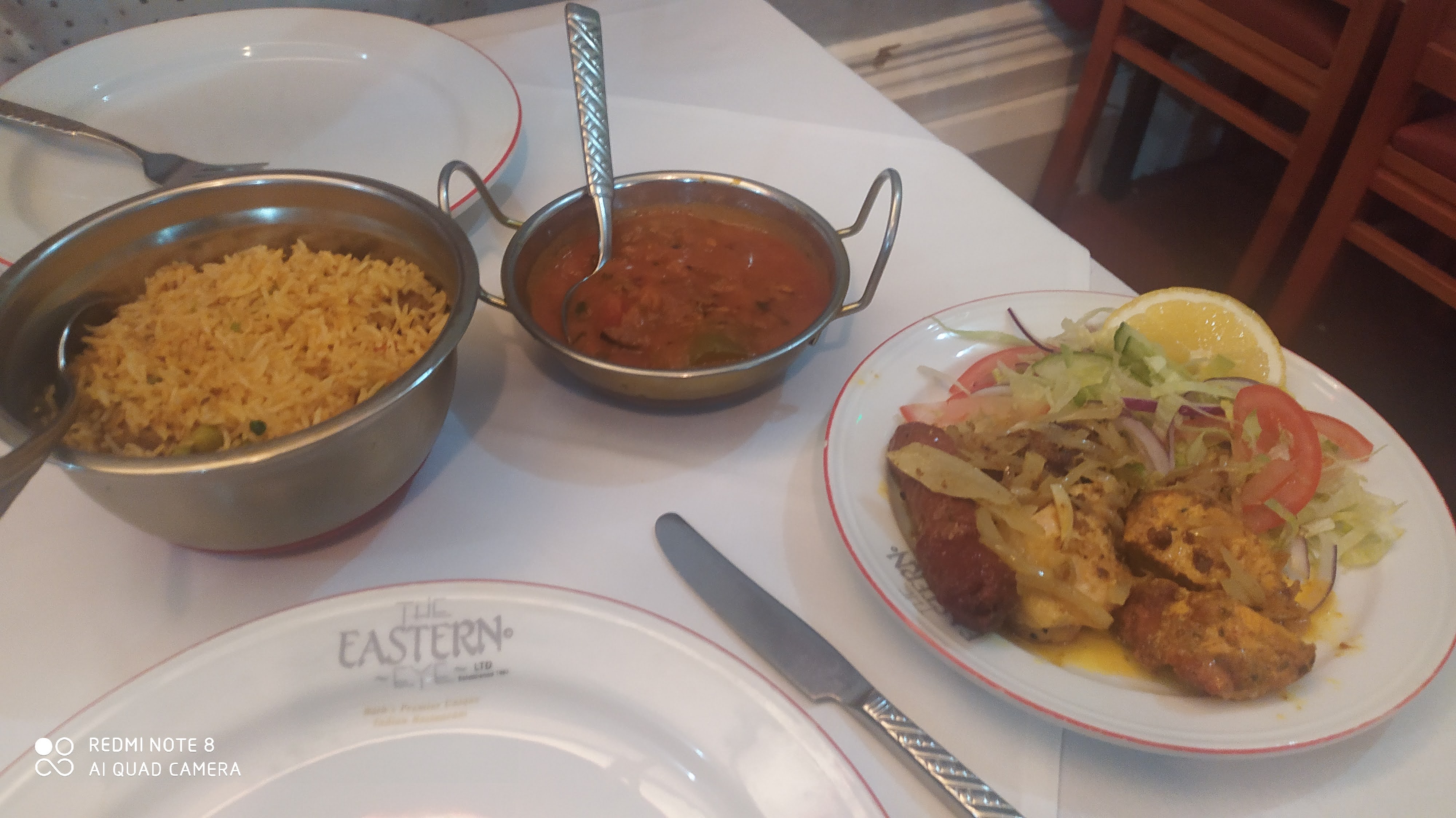